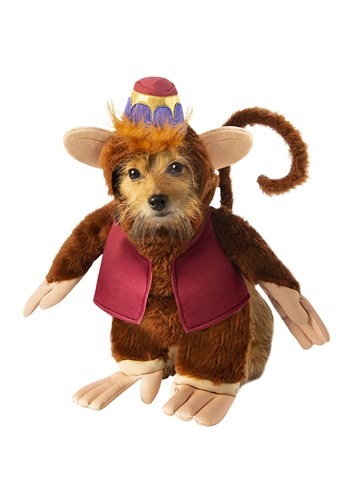 Time to Monkey Around

Haven’t you always wanted a pet monkey? No need to contact your local monkey salesman. It’s much easier than that. Simply grab this Abu Dog Costume. Aladdin’s partner in crime and best friend was that spunky primate and now you can turn your pup into the lovable, Abu.

No need to train your pup to stand on his hind legs. The shirt that makes up the majority of this costume takes care of that. Abu’s cute vest is sewn to the front. The shirt has two stuffed arms as well as a stuffed tail attached to it. Your doggie’s front legs will fit right into the monkey legs. The hood of the shirt has an attached fez hat that looks just like Abu’s in the Disney feature film.

While you are trying to impress the Sultan’s daughter your doggo can pose as a playful primate. The two of you will surely steal the show, as well as a few hearts along the way. Together you both can rule the town this Halloween. You may not have a genie to grant wishes but no one can resist a puppy dressed up as an adorable monkey. Especially one as awesome as Abu!