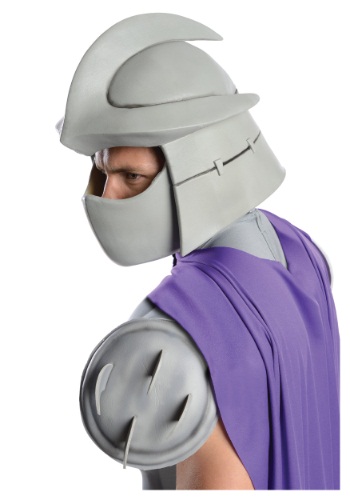 Heavy is the Helmet

You're a simple villain. You just want to be the best leader the Foot Clan has ever had and take over the streets of New York City. It's really not asking for much. However, you keep running into problems with those meddlesome Teenage Mutant Ninja Turtles. Every time you hatch a new plan, they show up and ruin everything. Talk about rude.

It's probably about time that you handle this situation yourself. Your foot soldiers have families, after all. You don't want them getting hurt and unable to provide for their households. That's not the kind of leader you are. No, it's high time you take care of these shell-heads with your own two hands. Although, they do seem to be well-rehearsed in the art of combat. You can't just go at them unprepared. Grab this officially licensed Shredder Mask. Not only does it look downright intimidating, but it also offers protection. The last thing you need is a head injury. Who would lead your clan if you were out of commission? So, toss on this helmet and show those turtles why they should stay in the sewers where they belong!

This officially licensed accessory's design was inspired by the classic TMNT cartoon. The helmet and face mask combination is made of molded grey latex. It only comes in one size, but should comfortably fit over most people's heads.

This Shredder Mask is in adult sizing.
Answer
Ask a Question
Reviews