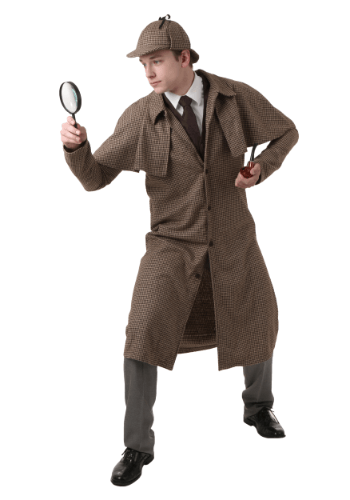 There’s a mystery afoot! It’s time for the game to begin! Something is just not right about this latest bit of mischief in town, and you are just the guy to figure it all out. Maybe the Mayor is up to no good, or the shady shopkeeper has a nefarious side “business,” or perhaps Moriarty is just up to his old tricks again, playing mind games with you until someone emerges the victor once again.

Whatever the situation is, if you throw on this outfit, you’ll be ready to solve any mystery that comes your way. In this classic style Adult Sherlock Holmes Costume, you’ll be the brilliant investigator that everyone envies. And no, not the Robert Downey Jr. one, he’s too brash. And no, not the Benedict Cumberbatch one either, he’s too arrogant. No, you’re going to be the original: witty and dry and charming, just like Sir Arthur Conan Doyle intended. With the iconic ear-flap hat and brown coat, you’ll be prepared to get to the bottom of any hounds in the Baskervilles, or scarlet threads of murder in our towns.

Just remember, Holmes was never very good at telling stories, or indeed, telling much about himself at all. So, you’ll need to pick up a Dr. Watson somewhere along the way, as well as a pal willing to play him. Watson will be more than willing to recount your adventures in the dark alleyways of London, moors of the British countryside, or suburban streets of your very hometown. Just remember, no mystery is too great, you just can’t let your mind give up on the clues you’re given!