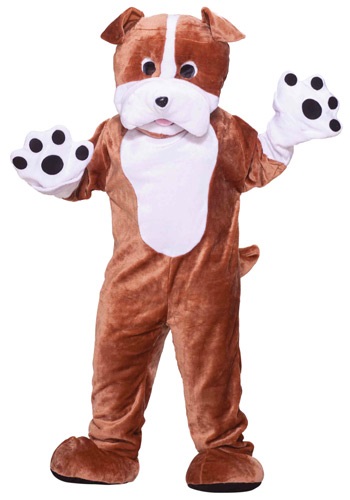 A MASCOT'S WORK IS NEVER DONE

This mascot costume might look all soft and cuddly, but don't be fooled. A mascot's work is hard and relentless. When you dress up in this costume, you won't just be some little cuddly puppy. You'll be the team mascot, responsible for hyping up the crowd.

The players work hard every game, but you'll work harder. You'll be at the football stadium two hours before every game taking photos with fans and giving out as many high fives as you possibly can. And once the game starts, you'll be leading the crowd in chants and dances at every game stoppage. When halftime rolls around, you don't get a break; you're down on the field entertaining the fans, keeping them excited and engaged. Then, after the final play of the game, you'll stay another two hours, taking pictures with fans. Make no mistake, this is not an easy job!

This costume will turn you into an adrenaline pumping cheerleading machine! You'll be wearing a brown and white jumpsuit that's covered in faux fur. The jumpsuit has a zipper and a little tail on the back. For your hands, we've included oversized paws, and the same are included for your feet! But the best part of this costume is the mask. The oversized bulldog mask will leave you looking like a cartoon bulldog! It has soft-sculpted ears and mesh over the eyes and mouth so that you can see and breathe.

THROW A DOG A BONE

When you become a mascot, we hope that your team is good to you. We hope they appreciate all that you do for them. They couldn't do it without you! So, if you ever feel like they aren't appreciating you, don't be afraid to tell them to throw you a bone every once in a while!