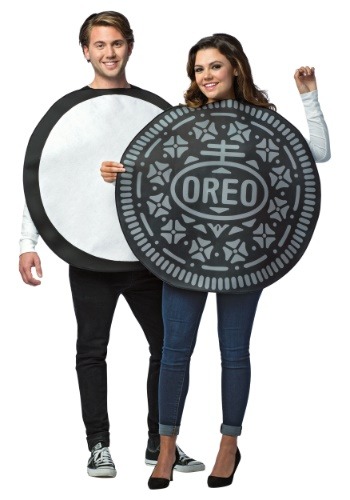 Looking for a unique and funny costume for Halloween this year? Of course you are, who isn't? Well, we happen to have an idea here for ya that is pure gold! Not literally. Literally, this costume would be considered black and white. That's not the point. Why not dress up as milk's favorite cookie this year? But this costume isn't just for one person, it'll take two to pull of this sweet costume!

You and your partner, while not actually attached, will feel inseparable in your oreo costume! You'll be like two peas in a pod, except you'll be two halves of an oreo! The only thing you two will be missing is a nice tall glass of cold milk. Preferably 2%. What do you think? You think you have what it takes to dress up as what might be the world's most delicious snack?

As you have probably already guessed, you'll be getting two costumes instead of one! But that's a good thing, who wants to dress up as half an oreo? That's not a thing. The costume is simple! You'll each be wearing a tunic. The tunics are shaped to be circular, and they are detailed to look like an oreo! It even says oreo on the front, so no one will be able to say they didn't get it. They have a hole for your head and a hole for your arms so that while you might be a cookie, you can still be mobile!

Do you have a third wheel? Someone who wants to dress up with you two, but you aren't sure how to help them? Well, we have the answer! Dress them up as a glass of milk! Then you will be dressed as milk's favorite cookie and milk!