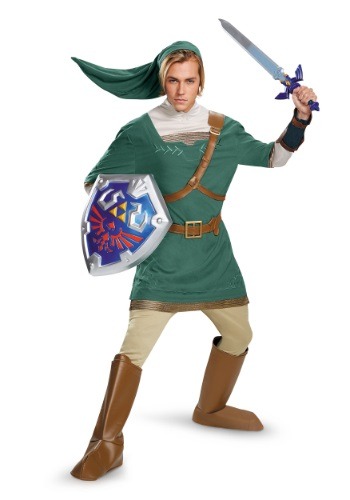 Oh boy! I'm so hungry, I could eat an Octorok!

For a guy who hasn’t uttered a word outside of the critically acclaimed Legend of Zelda Philips CD-i games and short-lived cartoon series, Link has amazingly managed to capture our hearts and imaginations for over three decades. Whether he’s a goat herder, a shipwreck survivor, an islander celebrating his birthday, or an innocent guy drawn into a horrible nightmare dimension to be turned into a Deku Scrub shortly before a malevolent moon crashes into and destroys the entire planet, Link’s origins are almost as many as the number of games he has starred in. And with the rampant success of Breath of the Wild, we can only expect more from our favorite Hylian for years to come.

The Hero of Time is no scrub, either. He can catch and throw aside a Gorgon made out of rock like he was made out of papier mâché, slow down and speed up time at will, fire explosive cannonballs with pinpoint accuracy, turn into the Fierce Deity to fight a literal demon under the right circumstances, and can easily carry hundreds of pounds of equipment while maintaining the agility to do back flips over bottomless chasms. He even resurrected the dead on one occasion, as seen in the instance of the Flying Rooster in Link’s Awakening. When you’re going up against the likes of Ganon, Vaati, and Majora, you really need to bring it!

If you’re a fan of Link, it won’t do to dress up as any other hero. Our officially licensed Link Prestige Costume for Men will let you just that in style, the complete package you need just short of the Master Sword and Hylian Shield to dress as your favorite video game character. This costume most closely resembles what Link wore in Twilight Princess.