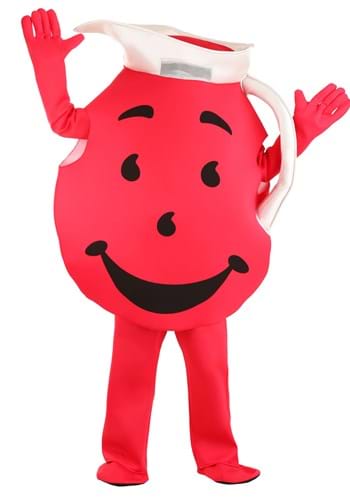 Almost everyone loves the Kool-Aid Man! He has to be right up at the top of the most likable people list, with Santa Claus and the Easter Bunny. And what's not to love? He's a giant walking, talking pitcher of a delicious sugary drink! He sounds like our kind of guy. The only people who don't like him, are the people whose homes he ruins.

We can see where they are coming from. If a giant pitcher of Kool-Aid smashed through our wall, we would get upset too. Does he plan on paying for it? What happens now? He smashed through the wall and said "Oh yeah!" but now we're all just standing in the kitchen with nothing more to really do or say... We aren't totally sure why this pitcher is even here right now, to be honest. He hasn't offered any of us Kool-Aid, which seems like the clear next step for a person that is full of the stuff...

This costume turns you into one giant pitcher of Kool-Aid! You'll be wearing red leggings and boot covers to turn any shoes into Kool-Aid colored ones! Not only that, we have also included gloves, to make sure that no sign of human skin is showing. but let's not forget the most important part, the tunic! The tunic will transform your entire torso into a giant pitcher of Kool-Aid with a face on the front! You will be able to see through a section of mesh towards the top of the pitcher.

When you get your costume, you might find yourself compelled to run through some walls. We urge you to ignore this desire and fight it at all costs. You aren't actually a giant pitcher, and running into a wall will really, really hurt. Just keep that in mind!