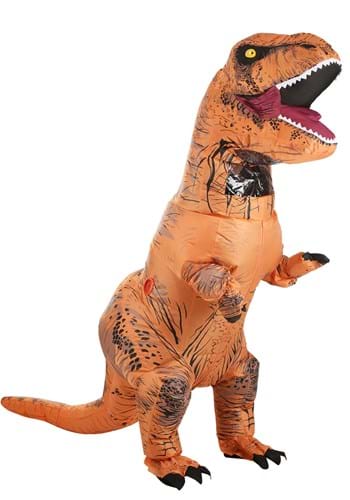 Because, sure they look really cool and it would've been amazing to have a zoo of dinosaurs to go gawk at, or a theme park entirely devoted to them, but mostly because we would have totally loved to have dinosaur pets. Can you imagine a world where people walk little dinosaurs around on leashes like dogs? Where people cuddle little baby dinos like they cuddle kittens? How awesome would that be?

Instead we live in a world bereft of dinosaurs. Tragic, we know. Of course, we're only missing real dinosaurs. There are plenty of places where we can enjoy giant animatronics, movies, or even parks devoted to dinos, so that pacifies us a little.

You know what we like even more than the giant statues, skeletons, or movies though? Dressing up like a dinosaur. How you ask? Simple. Our Jurassic World Inflatable T-Rex Costume. Yeah, sure it doesn't truly turn you into a 40 foot high dino, but you'll at least look the part! The jumpsuit is inflatable with a cleave vinyl panel so you can see what you're up to. There's elastic around the wrists and ankles to make sure you and your dino's moves are synchronized. Thus you can take on dance parties or costume parties by wearing your true colors: King-of-the-Dinos T-Rex brown. Yes, it's not as good as actual dinosaurs, but having tested out this T-Rex suit by playing lawn games, going on rides, busting a move, and causing reptilian mischief? Well, we're quite pleased with it as an alternative.

$89.99
Item # RU810481 | Write A Review
Items Included
Product Highlights
Size Chart
ST
Inches Centimeters
Costume Sizing Tips
Product Description
Questions & Answers
There are no questions for this item yet. Be the first to ask a question!
Ask a Question
Reviews Write A Review