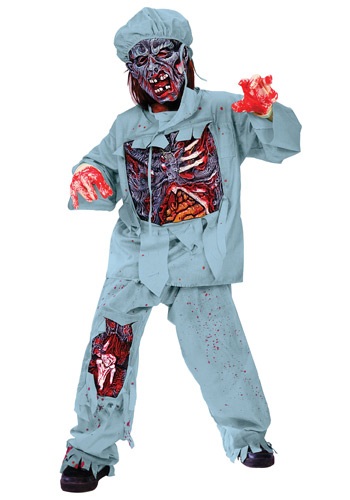 We know what you’re thinking. Your kiddo said they wanted to be a zombie doctor for the next costume day at school. We’re telling you, they want to be a zombie that was once a doctor, not a doctor who specifically treats zombies (a zombologist? A post-pathologist?). How would a doctor even work on zombies? They can’t be put under, they’re already dead, and there’s no making undead tissue heal. Plus it’s just not fun, it would just be a regular doctor costume. Trust us, your kiddo wants this Child Zombie Doctor Costume, STAT!

Seriously, dressing as a zombie is already fun for costume days. You get tons of bloody and gory makeup, you can kind of stumble around and try to eat people’s brains—it’s a riot! As a doctor, you just get to frown and babble on using words that nobody understands. But as a zombie who was once a doctor—well that’s giving great backstory to the zombie!

It’s too easy to forget that zombies were once people. So knowing that your kiddo’s zombie used to be a doctor makes everyone wonder: How did he get bitten? Was he one of the first bitten, when he was trying to help figure out what made the undead start walking the earth? All of these are good questions for the kid wearing a costume that features a shirt with an attached (read: exposed) zombie chest, pants with a zombie knee, and a zombie face mask! Also included, to complete the former doctor look, is a scrub cap, mask, and gloves. All your kiddo needs now are some…braaaaiins!

Still not convinced? Well, we don’t know what else to tell you except that zombologists have never been a real thing, so we don’t actually have a costume for you for that. Well, there was that one guy in that one movie who was trying to reconvert zombies…but those were more like vampires than zombies. Just trust us, this costume is too good to pass up!