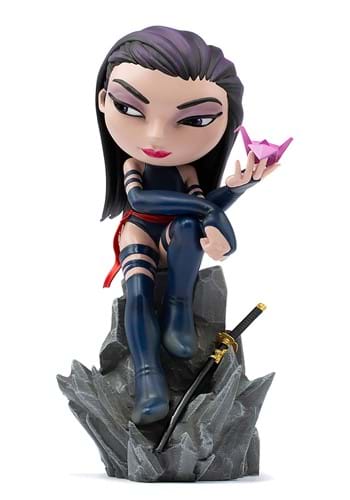 Psylocke is a complicated character, even by comic book standards. And that is saying something in a world where you can fight interdimensional beings (she's actually done this, it's a long story for another day). Weirdly, she is two people in one. Her mind is that of Betsy Braddock. Due to a crazy Marvel adventure, her body is that of a Japanese assassin named Kwannon. Because of this, Psylocke also has extraordinary fighting prowess and is arguably one of the best hand-to-hand combatants on the team. When she made her initial appearance, her ability was powerful telepathy. Eventually, it evolved to not only telepathic gifts but powerful telekinesis, which she typically uses to form a psionic knife or katana. This officially licensed X-Men figure shows Betsy doing a little telekinetic origami. If you are a fan of this fantastic mutant and want an X-men collectible, you have to check out this MiniCo X-Men Psylocke Figure.