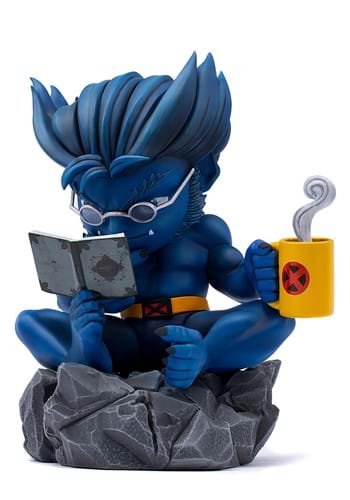 Say hello to the intellectual member of the X-Men, Hank McCoy. In the Marvel Comic, most refer to him as Beast. Umm, we don't think we have to elaborate on why he's called Beast. But don't let the blue mutant's looks fool you; he is as intelligent as he is intimidating, if not more. Due to the acrobatic abilities that Beast's mutation provides, he is an excellent fighter. Still, Hank would almost always prefer working in the lab with a good book versus getting his hands dirty on the battlefield. He's constantly assisting Professor X with many of his world-changing inventions and patented thousands of designs and scientific discoveries himself. He is one of the original 5 X-Men that Charles Xavier recruited to see his dream of a peaceful co-existence between man and mutant become a reality. If you dream of owning an officially licensed X-Men figure, you have to get your claws on our MiniCo X-Men Beast Figure.