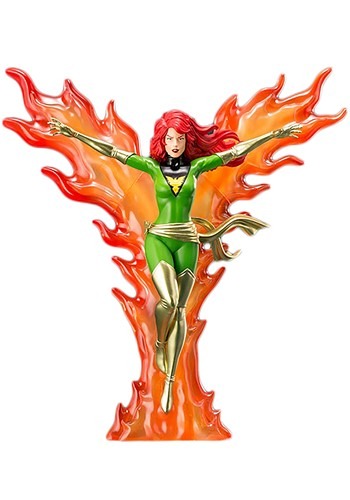 The Power of the Phoenix

The Phoenix Force makes Jean Grey's life complicated. Hey, you try having a normal life when you're being possessed by an omnipotent cosmic entity! Of course, that complication is what makes the Phoenix stories some of the most compelling and successful stories told by the X-Men comic books. This X-Men '92 Phoenix Furious Power Statue captures the destructive powers in the form of a highly detailed Art FX collectible.

Based on the iconic character, this Marvel statue recreates Jean Grey's Phoenix form in all of her fiery glory. The sculpt looks as though it was lifted from the pages of the classic X-Men comic books and she's even wearing her signature green and gold suit with the Phoenix symbol on her chest. The statue showcases her in her flight pose, complete with a flame silhouette behind her and her belt frozen rippling in the wind. She's made out of molded plastic and comes in a 1/10 scale size. The box comes with vibrant art based on the comic stories from the 90s, so you can feel proud displaying this collectible inside of the box.

This Phoenix Statue is just one part of the Art FX series inspired by the X-Men of the 90s and is sure to be the centerpiece of any Marvel collection. Be sure to check out our other X-Men figures to unite her with the team!