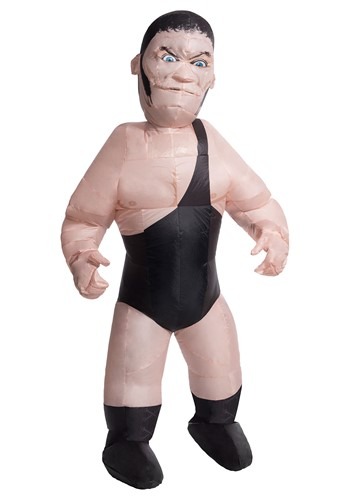 8th Wonder of the World

Andre the Giant earned his nickname, the 8th Wonder of the World. He conquered the competition in a 20 man Battle Royal. He defeated Hogan and he crushed Bret Hart. He even took on professional boxer, Chuck Wepner... by tossing the guy out of the ring! He lit up the silver screen with various roles in movies and he quickly became the lovable gentle giant of professional wrestling. With a resume like that and an amazing stature of 7 feet 4 inches tall, he truly was something out of the ordinary! If only there was a way that anyone could harness his gigantic-sized stardom...

Wait, maybe there is a way for us average folks to get the size and style of the Andre the Giant! If you want to be extraordinary, just like Andre the Giant was during his amazing career in the WWE, then all you need is this WWE Inflatable Andre the Giant Costume! It comes with everything you need!

Transform into the wrestling legend with this Andre the Giant Costume! It's officially licensed from the WWE and comes with a jumpsuit that creates an airtight seal. The exterior recreates Andre's signature look, including his  asymmetrical black wrestling singlet. The legs end in black to look like his boots and the very top is designed to look like his face. The back of the suit features two small fans that inflate the costume in a matter of minutes with a simple flip of a switch. The costume will transform you into the iconic wrestler from the 80s!

This WWE costume will have you ready to command the ring in no time! You can craft some furious feuds with your enemies, rile up the crowd, and rise to stardom, just like your favorite wrestler.