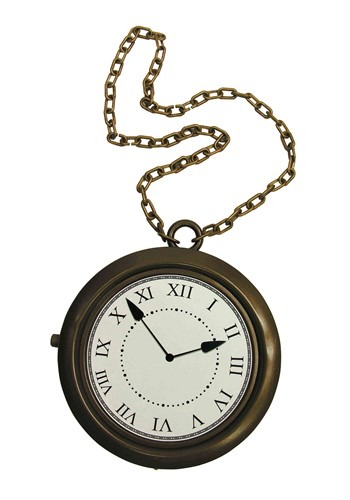 All in Good Time

Most people know that the White Rabbit from Alice in Wonderland was late (for a very important date, no less!). But very few people know the reason behind the rabbit's deep disturbance at his tardiness. The White Rabbit actually comes from a long line of famous Wonderland clockmakers and horology scholars. His tardiness and inability to keep good time was a bit of a sore spot on the family's pride, and thus, the rabbit's biggest insecurity.

But, since that whole Alice down the rabbit hole debacle, Rabbit's been doing some really good personal work; he has finally decided to embrace his roots and deepen his knowledge and understanding of clocks (and punctuality). He even re-designed his infamous timepiece into this White Rabbit Over-sized Clock Necklace. It's now one of family shop's best selling (and most accurate) clock models. Talk about a real turn around!

And now, Rabbit has gracefully allowed us to replicate his masterpiece! It's a large clock face sticker of Roman numerals, affixed to a hard molded plastic disc, strung onto a chain necklace. Now you can be hyper-punctual with the most elite model of timepiece this side of Wonderland!

That White Rabbit sure is an inspiration! He took a tragic flaw and turned it into his biggest life success. We can all learn from him. First step on the path? Deck yourself out in this clock and let it imbue your day with its timely perfection!