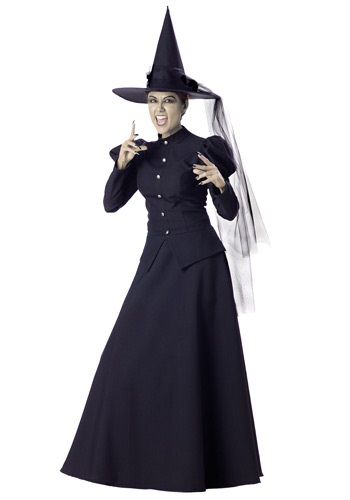 After years of teaching, you've learned that there is only one effective way to master classroom management: have your students believe that you are a witch. Before you had this revelation, you'd tried everything in your first grade classroom; you'd attempted a reward jar, behavior charts, even "Meditation Mondays." And then one day, while reading a book out loud, you did the most convincing witch voice ever heard, and your class sat mesmerized. No one moved, no one spoke. It was blissful. Then little Jayden raised his hand and asked, "How'd you do that?"

And well, ever since then, you've been a teacher by day and a witch by night. And your class has never been more well behaved! Sure, you have to give 'em some clues every now and then—like walking into the room in the morning with your car keys well hidden and a broom in hand—but it's totally worth it. Don't worry, we're not going to give you the whole "honesty is the best policy" speech; we've seen what a classroom of first graders is like. We say, slip on this Women's Scary Witch Costume and kick your ruse up a notch!

This is the quintessential witch costume—nothing too flashy, modern, or complicated. No, for this guise to work, you have to seem like the witch of their dreams (or nightmares) and be instantly recognizable. With this costume, you'll get the black dress, a petticoat to add fullness and drama, and the tulle-adorned witch's hat. You may need to learn a few basic magic spells to beef up the authenticity, but we think one day with you in this outfit ought to be enough to get you though June, at least!

At times it may seem like the education system is basically every educator for herself—so do what you need to do to keep order in the name of impart knowledge. Don't worry, we don't think you'll get reprimanded for your actions. We just sold a werewolf costume to your school's principal for exactly the same reason!