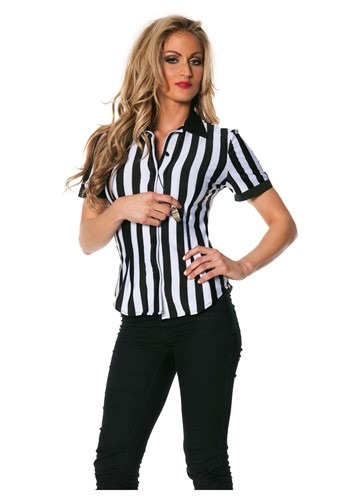 If you were a referee, what sport would you want to ref? We've been giving this some real thought and we still can't decide. See, reffing soccer would be fun, but it would get really old constantly having to deal with all the diving players. Everyone wants you to call a foul, and you're going to get yelled at if you do and yelled at if you don't. You simply can't win!

Being a baseball umpire wouldn't be much better. You'd have to deal with all of the crazy fans, and if the catcher misses the pitch then you are taking a 90mph ball right to the gut. Football is fun, but being on the field with those giant muscly men sounds like a recipe for getting run over by one of the players when you accidentally end up in the way of a play. No matter what sport we think of, they all seem to have some downside.

This shirt will turn you into one official referee! The shirt comes in the classic vertical stripe pattern that is so iconic for most referees and has a collar and buttons on the front. All you will need to do is get yourself a whistle and you will be ready to ref.

When you dress up as a referee, you take on the unofficial position of referee in your friend group. That means that if you see a dispute amongst your friends, you have to step in and mediate. Don't be afraid to call a foul if one of them crosses the line! If things get worse and this dispute turns physical, you might even have to eject one of them from the room until things cool down. No one said being a ref would be easy, but we know you are up to the task.