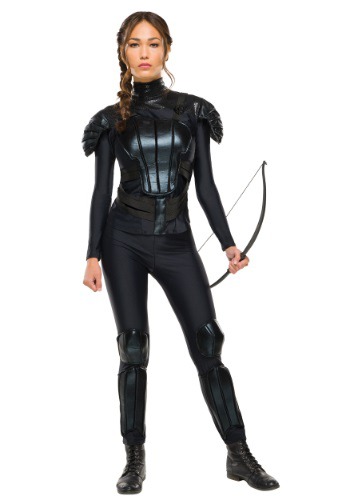 You know, Katniss doesn’t get enough credit, as far as we’re concerned. She basically only volunteered as tribute in order to save her sister from dying, with the full understanding that she would probably die instead (or if not, kill a bunch of people...ugh, that’s rough). Instead, her volunteering kicked off a chain of events that brought down an evil dictatorship. Not bad for someone who had absolutely no intention of that happening. We think that makes her even more admirable than she already is! So if you’re that same type of reluctant hero, or maybe you just want to celebrate how cool Katniss is, then pick up this Katniss Mockingjay Women's Costume.

In this look, everyone will see that you’re someone who doesn’t accept the status quo (which is a terrible status quo, if you ask us). You’ll put yourself on the line to see that something bad doesn’t happen to the ones you care about. And if pushed, you won’t fail in fulfilling your role and overthrowing the system. Don't push Katniss, you hear?

Ok, maybe that’s a little much. You don’t need to overthrow a dictatorship just to wear this costume...but maybe it will be a bit easier to stand up for the little guy. After all, this look might make you feel a bit braver and stronger than normal. The shirt comes as a mock turtleneck and includes foam armor and decorative straps. The matching pants feature sewn-on knee and shin guards. To complete the ensemble, a 15” diameter Mockingjay pin in included. A bow an arrow set is not included, but accessorizing with one is always a good idea, especially if you think you might find yourself in Panem's most terrible event.

Just make sure to be safe while you’re pursuing your Katniss-inspired activities. Remember there are other tributes that might not be so happy to help you, so always keep an eye over your shoulder! The best thing to do is only trust yourself..and maybe one other person…and definitely your look!