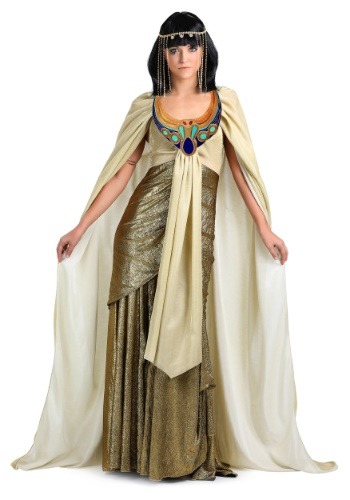 Most people know about Cleopatra, the brilliant woman who showed up to Julius Caesar’s palace in a rolled up carpet, then later won the heart of Marc Antony, and then followed that by winning the queenship of Ancient Egypt, and then ruled it successfully! Phew. Talk about a #girlboss, right? It’s a pretty impressive list of achievements for one lifetime. Who could even be considered a modern version of Cleopatra? Can you think of anyone? We sure can’t. That’s what makes her so special and powerfully unique—there’s never been anyone like her, before or since. So when you throw on this Women’s Golden cleopatra Costume, remember, you’re embodying one of the few people in the history of the world that has had no equal.

So whatever you decide to do while in costume, always think to yourself, would Cleopatra just let some jerk get in her way on the subway? Would she allow someone to double charge her morning coffee? Definitely not! Act queenly and the world will be yours!

This irreplaceable look comes straight to us from ancient times. The dress is a demanding shade of gold and features an attached cape that will undoubtedly billow dramatically behind you for everyone to see. Both the dress and cape are of metallic fabric and will shine so bright you'll radiate. The neckline of the dress is decorated with embroidery resembling the highest ancient egyptian fashion trends. Make sure to accessorize with a Cleopatra wig or with army of followers ready to carry you atop a litter—either is up to you and totally character appropriate.

Queen of the Aisle

Remember, in this outfit, no one tells you to stand in the subway aisle while they sit, playing on their phone. You're Cleopatra, for goodness sake! The world will have no choice but to bend to your demands. Just make sure not to let all that power go to your head. Be a good and benevolent ruler like she was, and history will reflect well on you. You won’t leave behind the same legacy she did (no one can), but at least you’ll be doing good things, and that’s what counts!