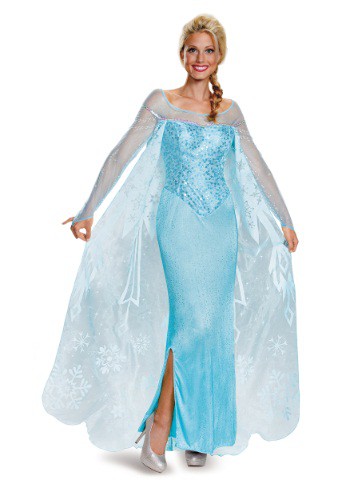 Do you want to build a snowman?

Having the magical icy powers of Elsa the Snow Queen at your disposal would certainly help—provided you could control them of course. If you’re an ordinary person, however, pretending may be the next best thing! This Frozen Elsa Prestige costume will take your snowy imaginings to the next level (and spare you having to conjure a dress from thin-air like the Snow Queen herself). Your friends and neighbors will marvel at your snowy creations and may even suspect you of having a wintery magic of your own. Now, some may argue that a dress isn’t ideal attire for building a snowman, but somehow I get the feeling that the cold never bothered you anyway.

This delightfully sparkly dress looks like a frozen waterfall in the heart of Scandinavia! Accenting the dress is Elsa’s iconic snowflake cape, which shimmers like early-morning frost when it catches the light. Slipping into this costume will give you an air of cold nobility tempered with the carefree attitude of a child belting out “Let it Go” for what may well be the hundredth time. The cape is sewn to the dress so that even the frigid northwinds won’t tear it from your royal shoulders- how convenient is that?

After donning the dress and cape of this frigid monarch, invite the Anna that warms your heart and create an Olaf of your own! We’re sure it will be the pride of all of Arendelle when you’re finished. Maybe along the way you’ll be reminded, as Elsa was, that “Love is an Open Door” and “Some People are Worth Melting For”. At the very least, you’ll have a charming and wonderful winter-themed adventure as Elsa the Snow Queen—as long as you remember that you’re not actually immune to frostbite.