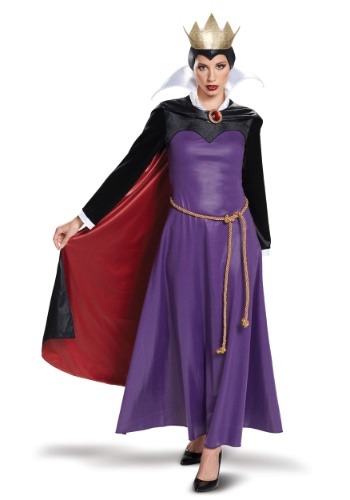 Something Wicked This Way Comes

When we were little we thought princesses had it made. They waltzed through the woods whistling with birds and talking to mice. They wore pretty dresses and sooner or later they met an even prettier prince. But here's the thing, that lifestyle would be crazy lonely! Princesses were routinely stranded in the woods without any peers, locked up in towers with no books to read and nothing to do. Why would we, as adults, want to play that role. The villains of the story were the ones who had all the fun! They brewed up potions, saw the future, and even ruled the kingdom from time to time. Honestly, the choice between damsel in distress and evil queen seems pretty simple to us!

Your dramatic entrance is in the bag when you show up in this stunning ensemble at your next costumed event! The purple skirt is ankle length, flaring out gently at the hips to give you room to move powerfully into a room. The cape is lined with a shiny red that hints at your skill with apples. The collar has the dramatic pop that any evil ruler at large requires and the whole ensemble is topped with a black-capped crown to let everyone know who exactly is reigning supreme.

Queen for a Day

Maybe this particular queen made a couple harsh decisions but that doesn't meen she doesn't look like a boss. And sure, maybe no one will eat any apple pie you bring to a potluck if you're wearing this outfit. That's good, they're using their instincts, cause this character never steps into the kitchen with positive, people pleasing motives. She's too busy ruling this kingdom. And while this costume will make you want to stare into mirrors, don't ask it any questions. Who cares who the fairest is when you know you're the boss!