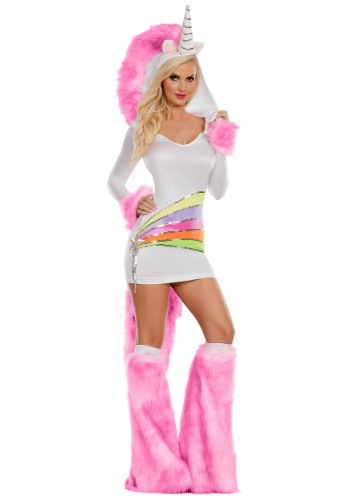 Unicorns are some of the most popular mythical creatures to have ever not roamed the Earth. And it's not hard to understand why. If you like horses, then you'll LOVE unicorns. Unicorns are similar to horses, except better in every way. They are faster, smarter, prettier, and they have a massive horn on their head. And while there is no way to prove any of this because they aren't real, we still believe it 100%.

If we had a pet unicorn, we would name her stardust. We would feed her, water her, and we'd even let her in the house! (After putting a pool noodle on her horn, we can't have her stabbing holes in the drywall.) We'd be the best of friends. I'd show her all the movies with unicorns in them, and we'd go for a sunset ride every night. If you know anyone that has a unicorn, we promise we would be the best owners ever.

This costume will turn you into the cutest mythical animal ever! You'll be wearing a dress that comes decorated with rainbows and stars, two of a unicorns favorite things. The dress also has fur cuffs and a mane built in. The boot covers are bight pink and have elastic bands on the top. The tail on the back is detachable and attaches to the dress with an elastic loop. But, the best part of this costume is the hood. The hood has ears attached and a big horn that makes this costume instantly recognizable.

If we end up getting a unicorn, what on earth do we feed it? Do they just eat hay, like a horse, or do they feed on moonlight and morning dew? Do they drink sunlight from a lakes reflection or just water like us? We are starting to feel a little unprepared for a pet unicorn.