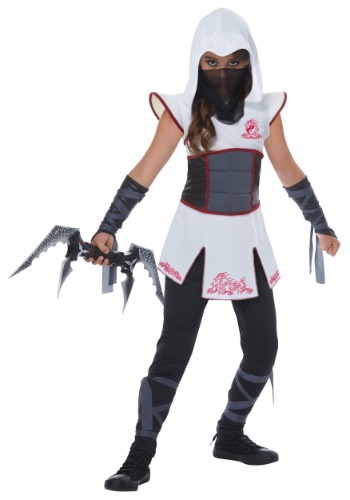 We wish that we could fight like a ninja. We watch movies with ninjas and they fight so well that they almost look like superheroes, flipping and kicking and swinging so fast that we can barely see their hands. Then, after the fight is over they slip away into the shadows, never seen again, the only evidence they were there being the carnage they left behind them.

Ninjas always seem to have the coolest weapons. Ninja stars look like they would be super fun to try and throw. Nunchucks look awesome too, though we think we would be more of a danger to ourselves than to others when we are trying to swing those things around as fast as we can. It would all look very impressive for a little while, but then you'd hear a hard thwack and we'd be crumpling to the ground with a bruise the size of an egg forming on our forehead. That would hardly strike fear into our enemies.

This costume will transform you into a superhuman ninja! You'll be wearing a white tunic with red accents across the bottom and a black and gray torso. This tunic also has a hood, to help protect your identity. To help with the same cause, we have also included a black mask! You'll be wearing leggings as well, and arm ties and leg ties to add to the mysterious effect of your costume. Last but not least, you'll be wearing gauntlets under your arm ties to help protect you from any danger you might encounter.