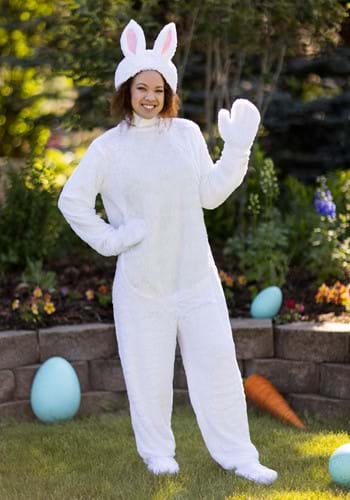 Rabbits Are a Serious Problem

Did you know that in Australia, rabbits are a very problematic invasive species? Really. The Aussies had to go to some pretty drastic measures to try to cut the population down as much as possible. Think about that when someone says rabbits aren’t dangerous. Sure, your pals may have really obvious scary costumes, but you have subtly in your corner. What we’re saying is, the next time you need to really make a room scream, just pick up this Adult Open face White Bunny costume—and be prepared to explain the devastation of invasive species on certain ecosystems. Ta-dah!

In this look, you’ll be able to cut down on an overpopulation of overdone scary looks as you push other herbivorous species to near extinction. You’ll also be able to get over, under, or around every fence, door, and gate, which we think is pretty cool. It’s what rabbits do. In this outfit, no one will be bold enough to say to you that rabbits aren’t dangerous creatures.

So basically, this great costume will help you stand out in any crowd. Like a fearsome bunny, you will love party-hopping in this bold look of bright white faux fur with sewn in mittens (which are able to clip back in order to free hands). Matching shoe covers wrap up around the ankles, and to complete the look, the hood fastens under the chin and comes with wire lined ears in order to easily shape for your preference. Doesn’t that sound terrifying? To an avid gardener or Australian naturalist, it probably does!

In this outfit, you’ll be the most dangerous animal at any party or gathering. Sure, your friends can show up as lions, tigers, vampires, or werewolves, but they’ll have nothing on your smart, fresh take on terror. Remember: nothing can stop rabbits from conquering everything they come across. The ears are to be feared. Fear the ears! Remind them of that when they tell you how “cute” you look.