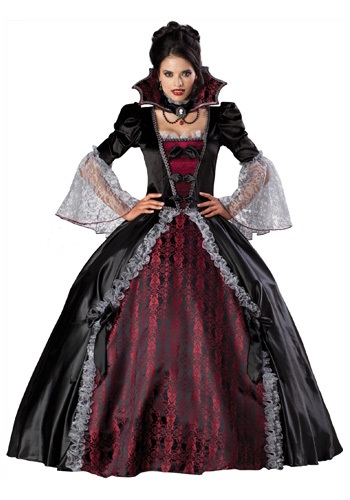 If we were going to be a vampire, we would want to live like a queen. We'd live somewhere like Versailles. Our coffin would be in its own room, where the walls are covered in candles and dark red velvet drapes. But this would be but one of the many wings of our castle. All of the windows would be covered, so we would be free to roam about at our own leisure, even during the day.

We would have servants, of course. They would be sure to keep us well fed; because if they didn't, THEY would be our next meal. It might sound cruel, but what can we say? We're vampires, it's in our nature. A vampires gotta eat, right? We just happen to eat human blood instead of salads! On the bright side, we definitely wouldn't be eating too much ranch! That's a real problem for us as a human.

This costume will turn you into a dark and regal vampire. You'll be wearing a dress that's been crafted to look as though it's from the Victorian era. The dress zips up the back and will hang all the way to the floor. The dress has three black satin bows that run down the front and flowy sleeves that will make your every move look incredibly graceful. The petticoat you'll be wearing has an elastic waistband and the hooping slips into the petticoat with the help of the instructions we've included. All you'll need are some vampire fangs and your costume will be complete.

What kind of vampire will you be? Evil might be in your nature, but that doesn't mean that you have to be evil! There are other paths; the first step would be trying to beat your addiction to human blood. It's the first step on the long path to being good!