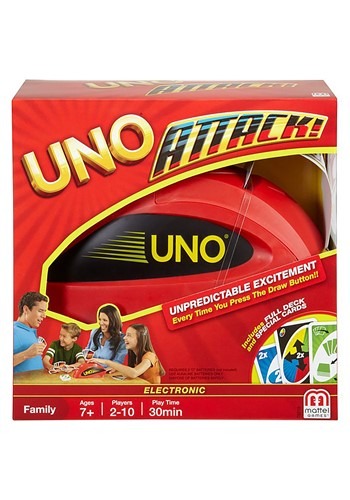 What's the Worst that Could Happen?

You're all gathered around the table. It's the same game that you've played countless times before. You've got a tactic. So long as they don't swap the color from green to blue again, you've got this. You even remembered to call out that you had one card left. You've got this!

Then, tragedy. Did they play Skip a Turn? No. That would have been frustrating, but you would have dealed. Did they change the color? No, not even that. What's drawing one card and hoping for the best next round? No. They've cursed you. They've played a Hit and you just know what is coming...

It's time to pull out the deck of your favorite family game... with a terrifying twist. It's time for Uno Attack! It's the game that you already know and love. 2 or more players gather around for a 30-minute game of tactics and excited shouts of "Uno!" But, there's a new card to bring devastation. Play the Hit card and force the next player to hit the button on the Card Launcher. Will they get a couple cards? Four? Or will that thing just keep going!? Toss in three C batteries to get the game going and bring the exciting twist of random roulette into your Uno game.

An Endless Wave of Cards!

Hold your breath. Close your eyes. Hit the Card Launcher... and pray to the spirits of the game that you won't be buried in a pile of brand new cards in Uno Attack!