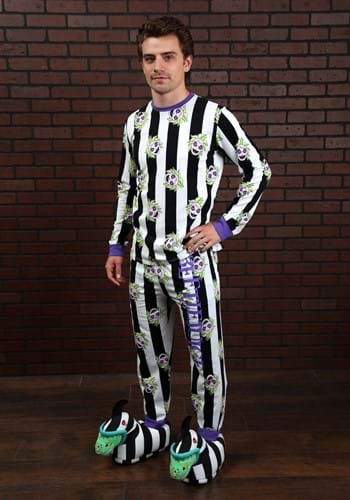 Beetlejuice is not the type of ghost to really relax. Even when you see him camping around in his tiny graveyard replica, he's plotting his next bit of mischief. In fact, any time he's given the standard "RIP' rhetoric, he's quick to explode in circus-style explosions and an announcement that it is Show Time! We mortals, though? Sometimes, we just really need to chill. If you'd like to lounge, relax, or even nap but still want to channel some of the spirit of the Ghost with the Most, we've got a way to help you do both at the same time: this two-piece Cakeworthy Beetlejuice PJ Set for Adults!

It's time to get down in Beetlejuice style. This officially licensed set of Beetlejuice Pajamas are a sleek shirt and lounge pants with purple rib-knit cuffs and the classic black and white stripes. We've kept them lively thanks to several all over prints of Beetlejuice's face everywhere you look! No need to call out his name just to see what he's up to because this ghost will be hanging with you all evening. (The best part is that he won't be working any mischief on you, either!)