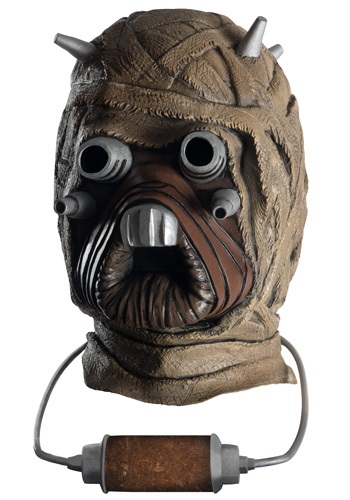 The sand people are easily startled, but they’ll be back soon, and in greater numbers.

Obi-Wan Kenobi, 0 BBY (Before the Battle of Yavin)

What’s under the Tusken Raiders’ masks? Numerous pieces of Star Wars errata have attempted to answer the question, but never quite satisfactorily, and now those explanations have all been wiped away by Disney’s relegation of the “Expanded Universe” to “Legends” status. But we can guess.

The acclaimed BioWare role-playing game Knights of the Old Republic suggested one possible history. In that game’s backstory, set thousands of years before the Star Wars movies, the galaxy was ruled by an Infinite Empire of an alien species called the Rakata. They were dark side users, and enslaved every species they came across. One species, however, resisted. The Rakata bombed their cities of glass into oblivion and enslaved those who remained. Of the few survivors left on the planet, some went underground, and adapted to a cramped life in the dark, evolving into the Jawas. Others walked the planet’s now-barren, desert expanses for millennia, becoming known as the Tusken Raiders when they attacked one of the first Republic settlements to attempt to re-colonize the planet, Fort Tusken. As for the taken slaves? Well, there’s one widespread species in the galaxy with very similar physiology to the Sand People, and no known homeworld. (If that was too opaque, they're humans, and humans are from Tatooine.) Pretty neat, right? It certainly makes Tatooine’s mythic centrality to the saga fitting if it were secretly the ruined cradle of humanity. But Star Wars defies that kind of teleological storytelling, so feel free to imagine whatever you like under this Tusken Raider Star Wars Latex Mask.