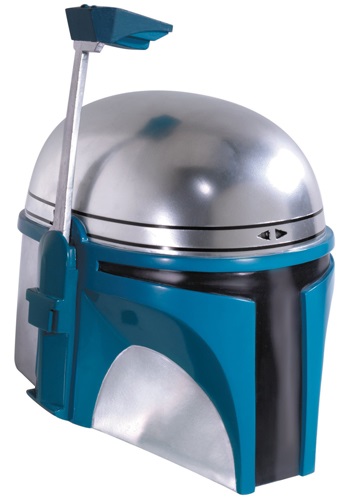 When most of us hear about the greatest bounty hunter in all worlds, we tend to think of the notorious Boba Fett, the only one who managed to track down and capture the tricksy scoundrel, Hans Solo, so long ago in a galaxy far, far away.  But, the tale of how Boba came to become so amazing is, itself, a pretty astounding tale.  Working to take down those he blames for killing his father, who could have known that Boba was, in fact, a uniquely formed clone of the galaxy’s former greatest bounty hunter, Jango Fett.

Well, when you are asked to be the perfect genetic sample for an entire army of future clones, of course you have to make sure that you can raise one as your own so you can pass down your skills and perhaps even the iconic Mandalorian helmet that you are so well recognized for.  That’s where we’re happy to offer this officially licensed Star Wars Deluxe Jango Fett Helmet in all its Mandalorian glory.  Snap the two pieces together and you’ve got yourself a fearsome look that anyone would think twice about confronting!