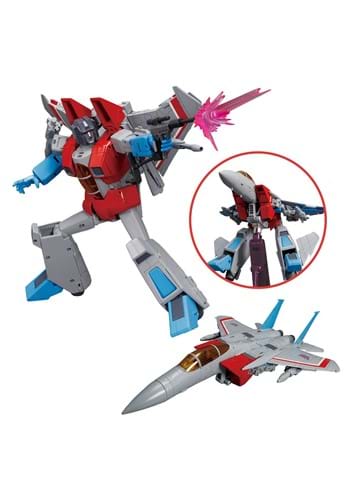 It's kind of hard to tell where Starscream's loyalties lie. It's true that he's a Decepticon, but he really has no love for Megatron. In fact, we've lost count of the number of times that he's tried to defect or usurp control over the team. Why are we telling you this? Well, because this Transformers Masterpiece Edition MP-52 Starscream Figure has the same shifting allegiance. He might just try to take over leadership over your collection! With an incredible level of detail, he's definitely a force to be reckoned with.

This Starscream figure is a high-quality collectible that's inspired by the iconic character from Transformers. The figure has 2 different modes. His standard robot mode, which features a variety of different points of articulation, so you can pose him in tons of battle poses. His second mode, which is his jet fighter form, is truly a sight to behold! He also comes with plenty of different accessories to help you customize your figure! Move over Megatron, because this Starscream figure is definitely going to become the top dog in your Transformers collection!