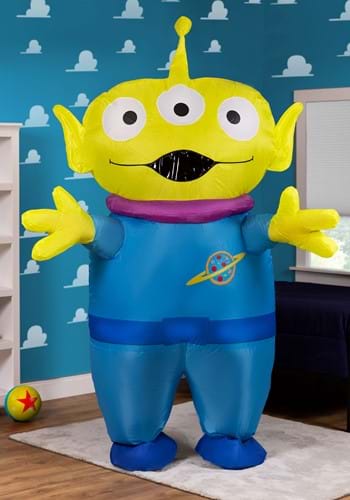 There's nothing like watching a beloved character come to life. You can't help but let your surprise and fascination come out. That's what we think is really going on when the group of adorable aliens react to (just about) anything in Toy Story. Buzz shows up in their rocket claw machine? Ooooh! Woody shows them around Andy's room and they witness the glory of a basketball? Ooooh! Even a mere reference of 'the claw' itself is bound to provoke at least a quick Ooh!

But, what about we humans who are in complete adoration of the aliens? What can we do to help provoke the internal Ooooh! that we're holding in for our group of simple-minded, three-eyed, fully cute alien toy friends? Well, beloved Terran friend, do we have the thing for you! Imagine not only seeing one of these cute aliens but being able to step into their shoes and rise up in full alien glory. It is time!

Bring the Toy Story aliens to life with this officially licensed, Inflatable Alien costume from the hit Pixar series. This costume is a jumpsuit printed to look just like the three-eyed cuties that we've been admiring ever since Buzz and Woody got captured by Sid. It includes everything from their blue suit, purple collar, and wiggly antennae. Plus, with the included fan, you can give yourself the squishy look of the claw-gotten critters! The elastic at the feed keeps the air from escaping and your alien losing form.

RISE UP TO GLORY

Normally, the only way the aliens manage to lift themselves up is by waiting for the Claw to choose them. But, now, with a flip of a switch, you can watch this adorable alien fill out and stand as the chosen of all alien kind! We can't wait to hear how many folks give you a well-deserved Ooooh!