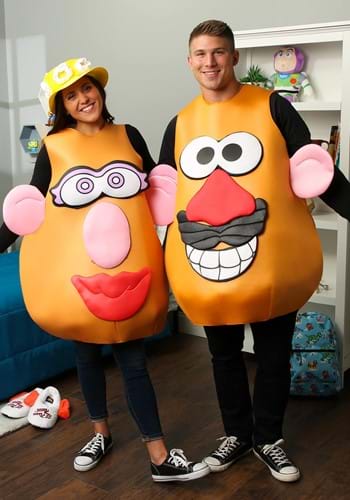 So we've got a soft spot for the Mr. Potato Head toy.

There was just something so enjoyable as a kid to be able to try out different eyes, noses and mouths on that plastic potato body. To put the ears where the nose goes, and the eyes where the mouth goes? We felt so clever, breaking the natural rule of faces. We're guessing it was our young minds trying to be creative. Don't worry, none of us ever went into cosmetic surgery.

Still, being able to trade out a facial feature at whim? That would be awesome. We know tons of people who would take advantage of that in a heartbeat. Instant beard for a day? New eye color? Done and done.

Lucky for you, you still can swap out faces. What? No! We're not talking anything permanent here! We're talking more like Mr. Potato Head. We've got this great Mrs./Mr. Potato Head costume that consists of a brown foam potato body. The ears are permanent, but the rest of the face pieces can be changed out and stuck on using the convenient hook and loop fastener dots! It comes with both the Mr. and Mrs. face pieces (and yellow foam hat), but only one potato body suit, so if you want a posse of spuds, order accordingly. In this outfit, you'll be able to swap out facial features at whim. Classic Mrs. Potato head? A more Picasso version? Feel free to show off your creative side!