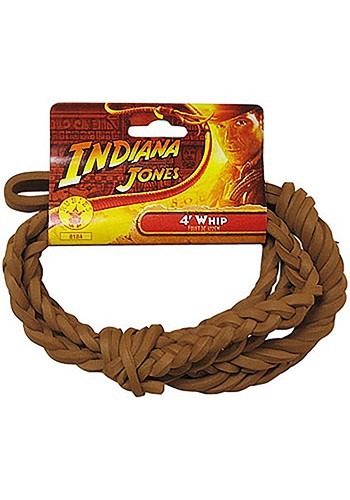 Saving ancient artifacts, stopping Nazi plans, and escaping certain death is all in a day's work for Indiana Jones. However, none of that can be made possible without a certain weapon in his arsenal. Some would say it's his vast knowledge and quick wits, others may say it's his incredible luck. You, on the other hand, know the right answer. It's obviously his awesome whip!

Now, you can complete your own Indy costume with this officially licensed Indiana Jones 4 foot Toy Whip. Before you know it, you'll be wrapped up in some crazy mission to obtain a rare relic before the Nazis can and you'll save the world from utter and total destruction. Lucky for you, this whip will be by your side the whole way. With this accessory, you'll have no problem swinging over bottomless pits, snatching weapons out of enemy hands, and keeping those nasty snakes at bay. If Harrison Ford can do all that, then you should have no problem!

This whip is designed to perfectly resemble the very whip that Indiana Jones carried with him through all of his wild adventures. It is made of braided foam. When fully extended, it measures to be 4 feet long.