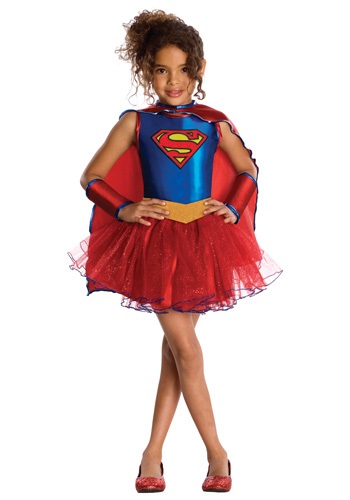 Heroes come in all sizes. Just look at your toddler. She may not be able to leap giant buildings (or even the couch) in a single bound, or run faster than a locomotive, or see through walls, but she’s still able to save the day time and time again. Who was it who found your lost keys when they fell back behind the piano? Her! Who talked her brother into eating brussels sprouts at dinner last night? Her! Who drew that super cute, super sweet picture that hangs on your fridge and always cheers you up no matter what kind of day you’re having? Her! She’s a real-life pint-sized superhero!

It’s only fitting, then, that you get her this Kids Supergirl Tutu Costume and make it obvious to everyone else what kind of hero you have spawned. Bypass Superman and go for his cooler cousin, Supergirl. Superman is neat and all, but he’s not nearly as cool as his cousin Kara. She has many of his same powers, including superhuman strength, flight, super breath, x-ray vision, freeze breath and super hearing. But she also looks way cuter in her superhero costume than he does. His is kind of boring, honestly—just a standard cape-and-outer-underwear combo. Hers is flashy and fun.

Your little girl deserves just such a cool, fun costume for all her heroics, so hurry and get her this Kids Supergirl Tutu Costume. The red and blue dress has a Supergirl shield on the front, a red tulle bottom, a yellow belt and a red cape to flutter as she soars above Metropolis. Red gauntlets complete the look. Now your little hero will be ready to go out and save the world!