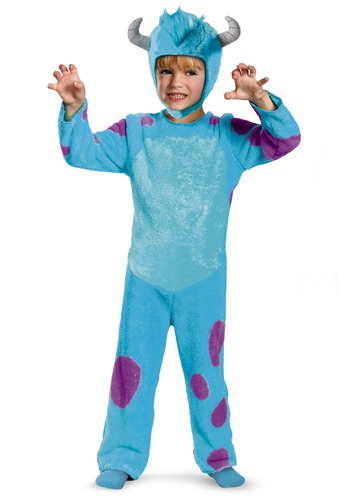 Alright, show us your best roar!

We hear your little guy has his heart set on joining Roar Omega Roar once he's old enough to attend Monsters University. We applaud his goal and we'd love to help him achieve it. It's well-known that the best way to be accepted into the prestigious monster fraternity is to be an exceptional scarer, just like James P. Sullivan, AKA Sulley. Loud and ferocious, Sulley has the talent to make a grown man quiver in his boots.

It's never too late to start chasing your dreams so the sooner your little guy starts practicing his scares, the better chance he'll have at rushing for Roar Omega Roar. You can support your kid's ambition by gifting them with a costume that could potentially help him or her reach their goal. This child classic Sulley costume transforms children into a mini version of the accomplished fuzzy blue monster. It's a plush jumpsuit that opens and closes via a Hook and Loop fastener tab and features a soft tail in back. The character headpiece also uses a Hook and Loop fastener tab to fasten underneath the chin.

Once your child has this costume, they will feel inspired to start practicing their scares. Don't be surprised if your future Roar Omega Roar rushee starts hiding under your bed or in your closet in order to give you the best scares because he or she is really just being responsible by preparing for their future!