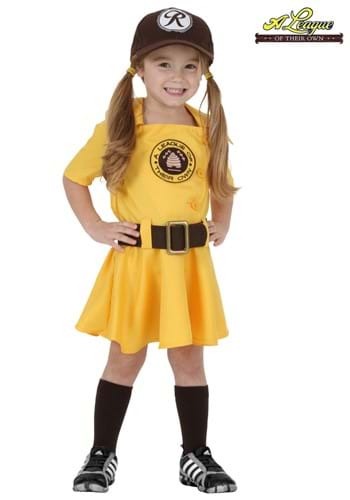 A League of Their Own Kit Costume for Toddlers

THERE'S NO CRYING IN BASEBALL!

Tom Hanks has tackled a lot of big problems in his past. He has dealt with an exploding oxygen tank on his spaceship, pirates hijacking his containership, being trapped in John F. Kennedy Airport, and a plane crash that stranded him alone on a tropical island for years save for the company of sporting equipment. (Note: NEVER travel anywhere with Tom Hanks.) It’s nice to see Mr. Hanks deal with a not life threatening situation for a change, even if that means he has to coach the likes of the Rockford Peaches.

One of the more troublesome players on the Peaches was Kit Keller, played by Lori Petty. Though not quite as talented as her sister Dottie, Kit was an indomitable spirit who shirked criticism and would bring the fight to whomever dared to give her guff. Although a little unsportsmanlike at times, if not a downright pain in the you-know-where, Kit’s heart was always in the right place, and she could sure throw some fire!

If your girl loves baseball and wishes she could be a Peach too, then we’ve got her thoroughly covered. Our officially licensed A League of their Own costume comes with Kit’s signature dress, belt, hat, and socks. Literally the only thing she’ll need out of the box is a pair of sneakers, some Big League Chew, and a fiery attitude (which she may very well already have). If you take her around dressed as Tom Hanks’ character from the movie, however, consider taking the bus. Given his track record, if you drive you may wind up marooned on Jupiter!