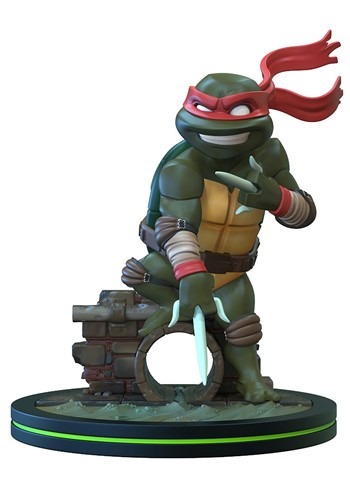 Raphael is a lot of things. He's a master of the ninja weapon, the sai. He's a connoisseur of odd pizza flavors. He's the undisputed powerhouse of the Teenage Mutant Ninja Turtles and an extremely experienced brawler. He's a protective brother, who'll pummel any baddie who tries to hurt one of his brothers. He's also a bit rude. (At least his is according to the TMNT theme song from the early 90s.)

Well, now you can have the rude boy in your collection when you get this TMNT Raphael Q-Fig figure, since it brings you the rough, tough, and totally rude Ninja Turtle to your collection.

This officially licensed figure is inspired by your favorite turtle! The figure is made out of molded vinyl and showcases Raphael in a combat-ready stance. He has that adorable Q-Fig style and looks great in any collection. He stands 4 inches tall and comes with a small base, which has sewer details on it to make it look like he's chilling in the TMNT lair. Just set him up in your collection, but just don't be surprised when he quickly takes over the whole collection with his rude nature!