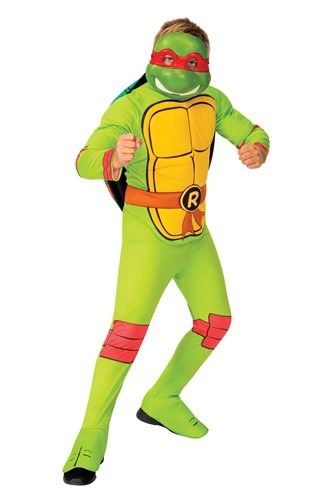 If your little one is the type that likes to fight first and ask questions later, we have the perfect costume. He can go out as the rowdiest of the four turtle brothers with this TMNT Classic Raphael Costume.

Raph is never afraid of a brawl. He’ll take on an army of Foot Ninja by himself, he’s the first to charge at the villainous Shredder, and he isn’t afraid to fight Leo, his own brother. If there’s a fight going down, you can bet that Raphael is there. He most likely started it. As much as he likes to bust some heads, he is also extremely loyal to his brothers. He usually fights to protect them… unless he happens to be fighting with them.

No need to track down any Ooze for your kiddo’s transformation. This costume will be all you need. The padded shirt is turtle green and has the underside of a shell as well as a red belt printed on it. The padding will give your youngster a muscular build so he won’t have to worry about hitting the gym before Halloween. The pants come with shoe covers and have more turtley ninja graphics printed on them. The shell on the back of the shirt is stuffable. Top off this mutation with the plastic mask. It is molded to the shape of the turtle brothers' faces and has a red mask as well as a toothy grin.

Your kiddo will take on the role of the turtle with the most attitude on the team. So be ready to deal with a handful on Halloween. We suggest having plenty of candy ready and maybe even a slice or two of pizza. Raph may be hardcore but even he can’t resist the delicious cheesiness of a New York slice.