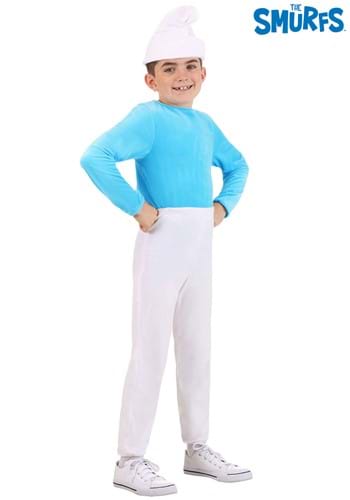 How do you think Smurfs get their names? Do they get them on the day that they were born or do they assign them names afterward? For instance, did Brainy Smurf get his name on the day he was born? If so, how did the other Smurfs know that he'd live up to his name of being the smart Smurf? Like, what if he grew up to be a really awesome painter. Would they let him change his name to Painter Smurf? Maybe Papa Smurf just has a sixth sense for these sorts of things and names each Smurf for the thing that they will be known for in the future! We bet that's it. After all, we've seen him use a magic spell or two during the Smurfs cartoons, so we're pretty sure he can use a little bit of the magic to see into the future...

Anyways! What would your child's Smurf name be? Maybe it would be Charming Smurf? Clever Smurf? Leaves all of the Lights On in the House Smurf? Well, whatever their Smurf name would be, they'll need this Kid's Smurf Costume to wear to fully assume their new role!

This exclusive costume is officially licensed and comes with everything your child needs to transform into a Smurf! It starts with a simple, light blue, long sleeved shirt. It also comes with a pair of white pants with elastic in the waist for a comfortable fit. Finally, the hat looks just like the ones seen in the iconic cartoon series, so your child will be able to create a unique Smurf look this year!

Smurf for the Whole Family

Don't stop with just your child! The whole family can become characters from The Smurfs with our great selection of Smurf costumes that come in all sizes. Be sure to check them all out!