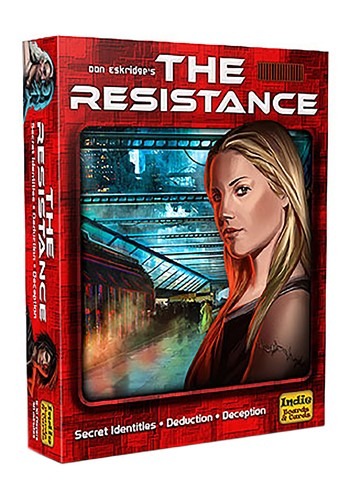 The Resistance Board Game 3rd Edition

The world hasn't exactly gotten better in this dystopian age. The Empire controls everything and the resistance is running out of resources. It is time for a few last-ditch missions to ensure the future of freedom... or watch it all fade away. Unfortunately, that means the Resistance has needed to recruit new faces. In a world of intrigue and uncertainty, no one can ever be sure who to trust. Can you even trust yourself!?

It's time to join The Resistance. If you've ever played Mafia or Werewolf style games, you know where this is going! This is a social deduction game where the Resistance outnumbers the Spies of the Empire, but it takes a number of twists to keep everyone in the game every round. At the beginning, each player draws a Secret Identity card that is never revealed until the very end of the game. Spies identify each other and, if you're using optional Plot Card rules, individual role powers activate. From there, a Leader is picked at random and they choose Teams to take on missions. Everyone secretly votes to approve or reject the team. If the team is rejected, a new Leader is selected until a Team is picked. (5 rejections in a row means the Spies have won the game.) Once a team is picked, the mission is underway and each team member secretly votes to Succeed in the mission or to sabotage it for failure. If all cards are Succeed votes, the mission goes off without a hitch. Otherwise, a Spy is present and the mission is failed. When either team "wins" 3 missions, victory is achieved.

Intrigue is On the Rise

Social deduction is the name of the game in The Resistance. Speak up at any time to discuss, negotiate, or even accuse your fellow players. Figure out who is working for the Empire, but be careful not to reveal your own role. You wouldn't want to be assassinated at the end of the game and find all your work to fall into Imperial hands!