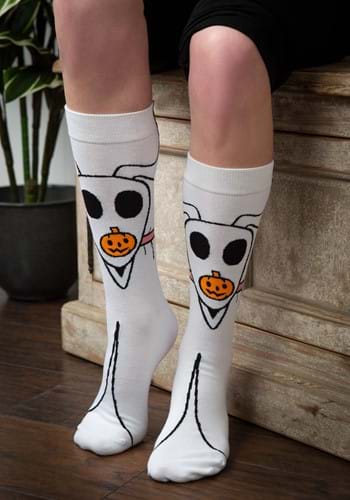 We know that Jack Skellington is obsessed with Christmas, but frankly, we don’t understand it. Christmas is great, but has Skellington taken a look at his home lately? It has pumpkins! Bats! A beautifully eerie full moon overlooking Spiral Hill! Its annual song and dance number beats the pants off of any other town’s traditional festivities. It even has a loyal hound, so devoted that he sticks with his master even after death. Who needs Rudolph when you have a pumpkin-nosed canine with a penchant for fetching femurs?

No other socks will warm your toes so faithfully as these officially licensed Zero the Nightmare Before Christmas 360 Character Socks! When you slip them on, the front shows Zero’s cheerful pumpkin-nosed face, and the back shows his wagging tail. They look so realistic that you might expect your feet to suddenly dash off chasing bones without your say-so.