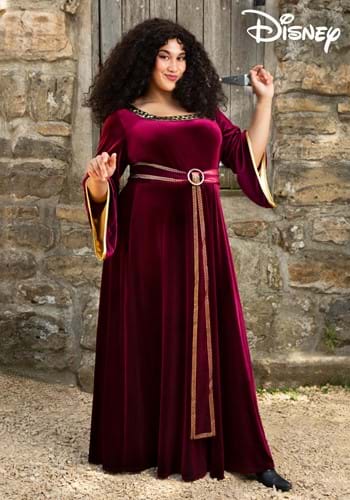 Mother Gothel Costume for Plus Size Women from Disney's Tangled

Unlike other villains, Disney's Mother Gothel doesn’t have her own magical powers. She might borrow a bit of immortality from the Sundrop Flower, but she doesn't have wondrous witchcraft or peculiar potions at her disposal like so many others.

However, that doesn’t mean that she can't hold her own against the host of other classic Disney villains! Her lying and manipulation skills make her quite the formidable "bad guy," especially when she starts laying on the 'Mom Guilt' like a pro. (All to a musical score, at that!) We can't condone her selfish actions, but we do have to admit she gets a lot done with her mortal talents.

Even though she’s pretty wicked, Mother Gothel still has style! If you want to let your inner villain out, you might enjoy this exclusive Mother Gothel Plus Size costume from Disney’s Tangled.

It includes her velvet maroon dress, which features flowing gold-lined sleeves and beautiful detailing at the collar. A long belt with gold trim and a circular buckle ties the whole outfit together. Although Mother Gothel has no problem being on her own, you might have more fun in a group with Rapunzel, Flynn, and Pascal. (We even might recommend a graying wig just in case your villainous tactics aren't quite convincing.)