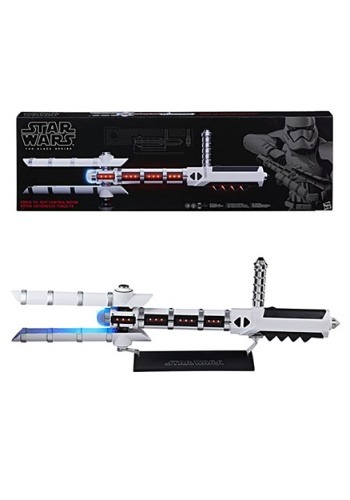 Thank you, FN-2199. He’s the Stormtrooper who battled it out with Finn on We have no idea why was walking around a battlefield with a riot baton in Star Wars: The Force Awakens, but he certainly deserves our gratitude. Not only did it lead to one of the greatest battle scenes in the movies, but it also introduced the world to a new weapon in the Star Wars universe.

We’ve been a little obsessed with the Z6 Riot Control Baton ever since it showed up in the movie. After all, it’s one of the few weapons that can resist the plasma blade of a lightsaber and we’ve seen those things turn a blast door into mincemeat. Of course, it’d be pretty dangerous for us to just hand out the real deal, but this collectible replica toy is a great way for you to have your own version of the weapon!

This Star Wars Force FX Z6 Riot Control Baton is part of the collectible Black Series. It has self-releasing flip-out prongs, a metal handle, and it even vibrates. It creates authentic sounds from the movie when you move it around and it actually lights up. It comes with a display stand, so you can proudly display it in the living room when you’re not practicing your First Order fighting techniques!

If you’re looking for a gift to please the Star Wars fan in your life, then look no further than this Black Series collectible… especially if they happen to shout the word, “Traitor!” a lot around the house!