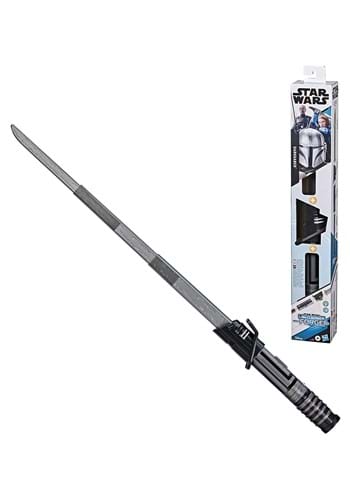 Many great warriors have held the Darksaber. It started in hands of Tarre Vizsla, the first Mandalorian to become a Jedi Knight. Later House Vizsla obtained the blade, passing it down through many generations. Eventually, Moff Gideon wielded it against Din Djarin. Now, you can be the proud wielder of the iconic Star Wars relic... even if you're not a Mandalorian warrior!

This Star Wars Light Saber Forge Series Darksaber is a toy version of the weapon seen in the various Star Wars series. The toy has 4 parts, which include a blade, cap, cover, and core. That means that you can assemble the toy and mix and match the parts with other Star Wars Light Saber Forge toys. The lightsaber also features electronic effects, so you can engage in plenty of imaginary duels against powerful foes. The toy in intended for ages 4 and up and does require 2 AAA batteries (not included). It's the perfect toy for any young Mandalorian in training!