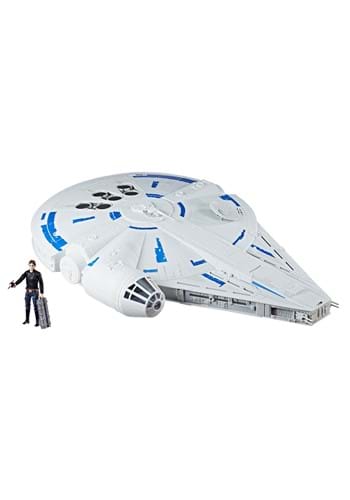 When Quick is Good and Fast is Better.

Making the Kessel Run is not a job for an ordinary starship pilot. It's one of the most hazardous routes through hyperspace, and a way to distance smuggled goods from the Galatic Empire. To make the run in record-breaking time, Hans Solo calls upon his knack for flying by the seat of his pants, as well as a superior navigation technology and the impressive performance of the Millennium Falcon.

No spaceship on record has survived so many near-crashes and near-collisions with meteorites and space debris than with Hans Solo at the helm.

This Millennium Falcon starts to lean toward being more of a cleaner, fresh-out-of-the-showroom version, first owned by Lando Calrissian. But it doesn't take much to transform her into the fastest hunk of junk in space. It vibrates. You can see panels explode and listen to different Falcon noises. Then increase interactivity by joining the Falcon with the Wear Force Link technology.

Put It through Its Paces

Once you have this model of the Millennium Falcon in your hands, imagine the playtimes you will enjoy, putting it through its paces—and chasing and being chased everywhere in the galaxy.