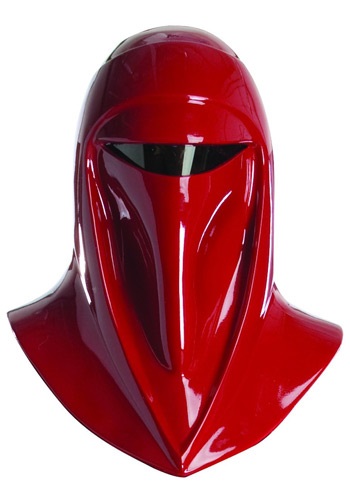 How much do you think a member of the Emperor’s elite guard gets paid? The benefits package must be out of this world! Just think about it. It’s their responsibility to protect the most powerful man in the entire galaxy. They don’t just hand that job out with some heavy compensation. Maybe you should consider that as your new career path—Imperial Guard of Emperor Palpatine! That kind of has a nice ring to it, doesn’t it?

Well, now you can get ahead of the game by having your own Imperial Guard Replica Helmet when you head in for the next Imperial Guard interview. This officially licensed Star Wars mask perfectly recreates the helmet worn Return of the Jedi. It makes for the perfect display piece, or can be worn to make you look ready to guard the greatest Sith Lord the galaxy has ever seen!

Questions & Answers
Q: Who makes this helmet? Do you have a company name. Thanks.
Asked by Stephan | April 27, 2020
Answer
Ask a Question
Reviews