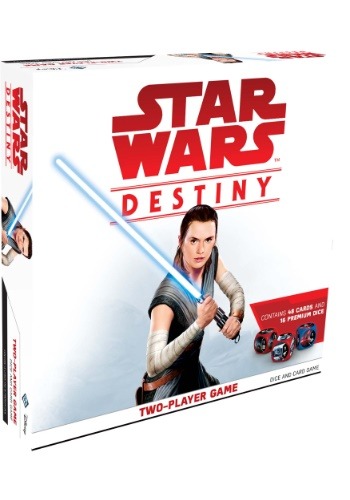 Let’s Get Ready to Rumble

It’s a duel for the fate of the galaxy. In the red corner, we have the mysterious and brooding Kylo Ren. He might be a little off-his-rocker, but he has a mean looking lightsaber and the training to back it up. IN the blue corner we have Rey, the scrappy young pilot who just so happens to have an extreme aptitude for learning powerful Force moves on the fly. Who will win? Well, that all depends on how well you play the game!

This Star Wars Destiny: Two Player Card Game is an intro the collectible card game based on Star Wars. The game is recommended for ages 10 or older and can be played right out of the box. It comes with two themed decks. One is based on Rey, while the other based on Kylo. Each one features a variety of cards and dice that allow you to battle your opponents to the bitter end! Of course, each deck may be modified using the other Star Wars Destiny game products, creating limitless possibilities in deck designing.

Decide the Fate of the Galaxy!

When you play this Star Wars card game, you can finally figure out whether the light or dark will land the finishing blow for the fate of the galaxy.