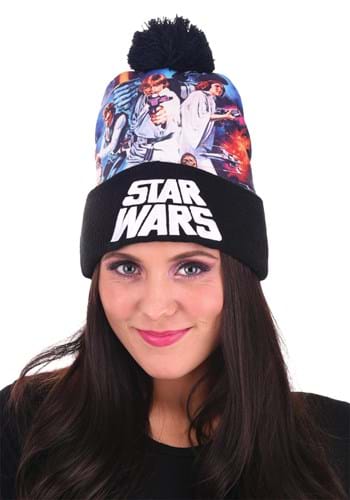 Hats ON to Star Wars!

Are you the biggest Star Wars fan in this galaxy and galaxies far, far away? The series, no, the franchise is forever growing and expanding for new and old fans alike. But perhaps you’re an old head, and the only Star Wars that truly matter are the original releases. Are you strongly opinionated about which order people should watch the series? Yes, a linear view gives a look into the character’s relationship, but its release order is how it was meant to be experienced. Perhaps the idea of a good dinner conversation is debating the age-old question of who shot who first in A New Hope? Han Solo’s character development relies on how this scene is supposed to play out. No matter who you believe shot first, which order to watch the episodes, or which episodes truly matter. We have a hat for you.

If you’re a loud and proud old Star Wars head, this beanie is perfect for your, well, head. Our Star Wars Sublimated Crown Beanie is officially licensed Star Wars winter wear. The beanie has a black pom on top and a black flap with embroidered wording. The crown of the hat features a sublimated image of the characters in A New Hope.