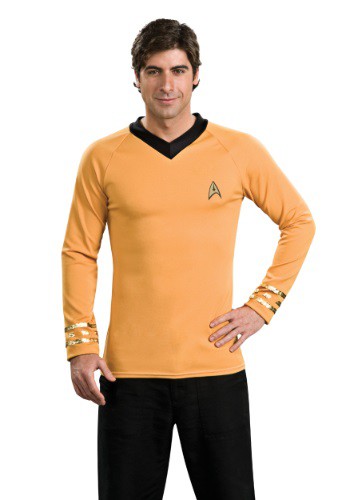 A five year mission to boldy go where no one has gone before? Easy, peasy. You've got it on lock. At least you will when you step into the Captain's chair on the USS Enterprise. Provided for one simple thing. That you've got your Captain's uniform on!

You can be just like Captain Kirk leading the crew of the Enterprise 'round and 'round the galaxy when you get this Star Trek Deluxe Captain Kirk Shirt. Styled just like the gear worn on the original Star Trek series in the sixties, you'll have Kirk's style down to a tee. It's got all the details just right: an embroidered Enterprise emblem on the chest, and the gold Captain's stripes on the cuffs!

Of course, to be the best Captain Kirk, you're also going to have to be able to master Willaim Shatner's unique phrasing, and his mastery of drop kicks and double fist hammer punches. Because you're just never going to know when you have to beam down to a strange alien planet and battle to save your skin. Pro tip: bring a couple redshirts along for the away mission!