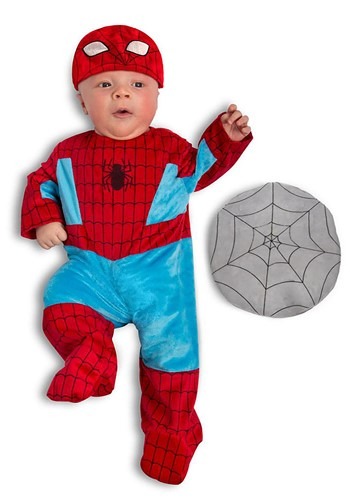 We all know the story of Peter Parker and how he was bit by an unusual sort of spider and subsequently received amazing powers. "Wow!" we think while reading about his adventures in the comics and watching them in blockbuster movies, "it must have been so hard to have suddenly gotten powers while still a teenager! He would have had to still navigate high school and hide the superhero stuff from all of his friends!" But really, it's for the best that he got his super abilities when he did. Imagine if Peter had gotten bitten when he was a baby? Uncle Ben and Aunt May would have found him sticking to the ceiling after naptime instead of babbling in his crib. Mealtimes would quickly transform into mess-times due to Peter trying to reach his milk bottle with a sticky web. And having those spidey senses would have meant that his aunt and uncle would never have been able to sneak up on him to clip his nails.

Your little one will look absolutely adorable in this officially licensed Infant Spider-Man Costume (comes without powers. You'll thank us later.) The one-piece jumpsuit fastens up the back and is printed all over with red, blue and black Spider-Man graphics. A snug little red hat detailed with web patterns and faux viewing ports goes on top of your baby's head. A round gray cuddler printed with a spiderweb is the sweetest finishing touch ever.

A Hero Is Born

Spider-Man, Spider-Man, naps whenever a spider can! Your little webcrawler will feel super in his super costume.