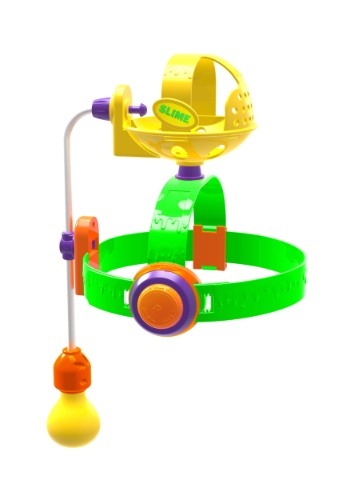 Slime time can be anytime, as long as you have Nickelodeon's Slime Splash Hat Game. You've seen your favorite celebrities get slimed on the Kid's Choice Awards and thought, "wow, I wonder what it's like to be splattered with green ooze." Now, you have your chance! Don't worry if you're not a Youtube star or an actor starring in a popular children's show because you don't have to win an iconic orange blimp to receive a head full of electric-green ooze. Just order this hat, fill a balloon up with slime (both included), give the spinner a flick to see how many times you squeeze the pump then wait for the gelatinous goo to run down your face. Who needs a boring Kid's Choice Award when you have a hat capable of dumping slime on your head? We'll know you'll find it oddly satisfying.

The officially licensed Nickelodeon Slime Splash Hat Game comes with everything needed to partake in the fun. First, make slime with the included packets and fill up 1 of the 48 balloons. Place the slime-filled balloon in the cradle, spin the dial, and squeeze the pump. Please note, slime may stain clothing and carpet so we highly recommend this as an outdoor game.

Are you obsessed with slime? If so, check out our automatic slime drencher too.